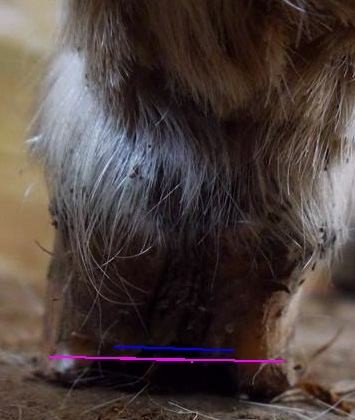 It looks as if the frog is not on the ground (the frog looks to be around the blue line), and the foot can probably be trimmed further, e.g. to the pink line - but this MUST be guided by finding the live sole and checking the collateral groove depths 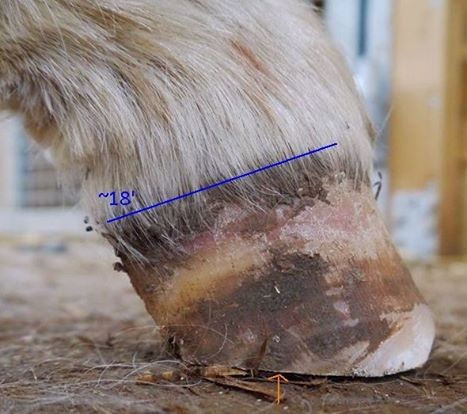 The camera needs to be perpendicular to the foot to assess the angles, but the hairline looks slightly too flat - perhaps around 18 degrees when it should be 23-25 degrees - if this is the case then lowering the heel will improve the hairline angle (guided by live sole and collateral groove depths).

Try to maximize the weightbearing surface of the foot - there appears to be a slight gap at ground level at the quarter (this might be because the ground is not level though). 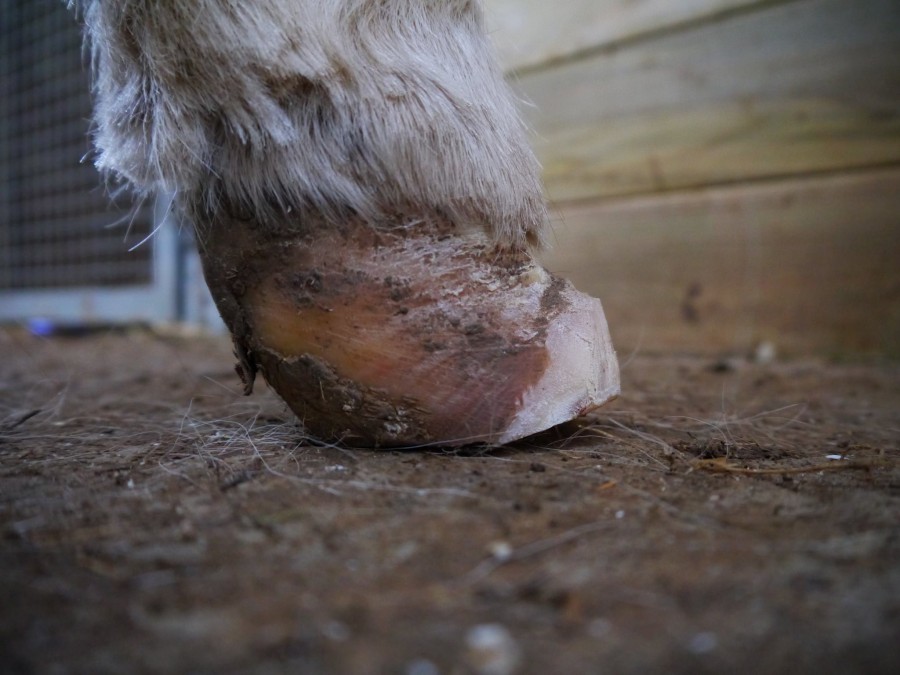 This is the medial view I think. The heel is far too high, the hairline appears to be horizontal or possibly even higher at the heel than at the toe - the hairline angle should be ~23 - 25 degrees. 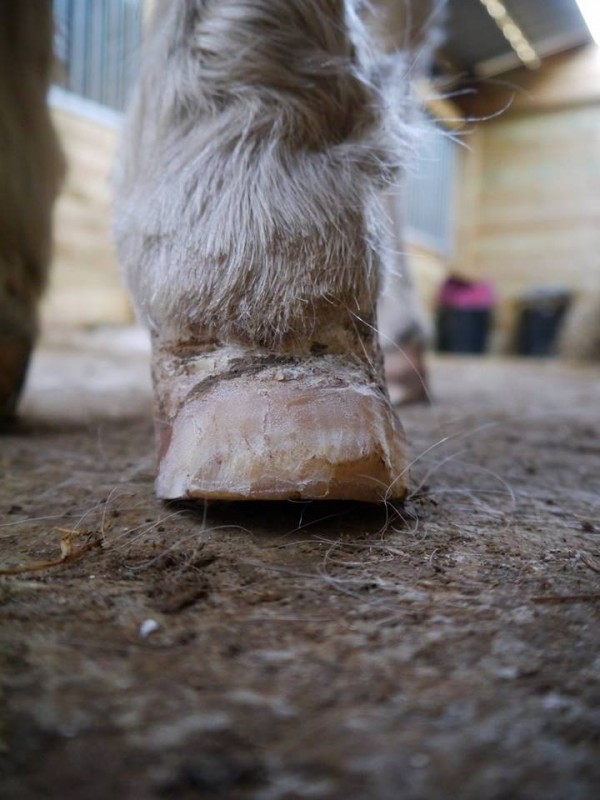 It's good that the toe is off the ground, but some of that excess material at the toe can and probably should be removed - I suspect that leaving it encourages further distortion. 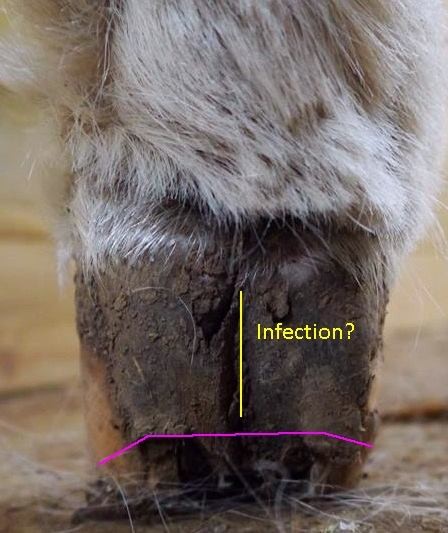 I suspect that, at the minimum, the heels can be trimmed to the pink line - BUT the rasp will need to be floated over the front of the foot so that the palmar angle is reduced and sole depth that might be needed is not removed from the front of the foot. The heel trim should be guided by the live sole plane (if it can be found - often there is a lot of compressed sole in feet like this) and the collateral groove depth. The hairline angle can also be used to guide the trim, but allow for sinking of P3 - ensure there is at least 15 mm between the tip of P3 and the ground at all times.

There appears to be a crack between the heel bulbs, which is likely to be infected and sore. CleanTrax soaks and daily/frequent antibiotic spray/solution treatment are essential to get rid of any infection. The back of the foot must be free from infection and pain, so that Pinocchio is happy to walk on the back of his feet. 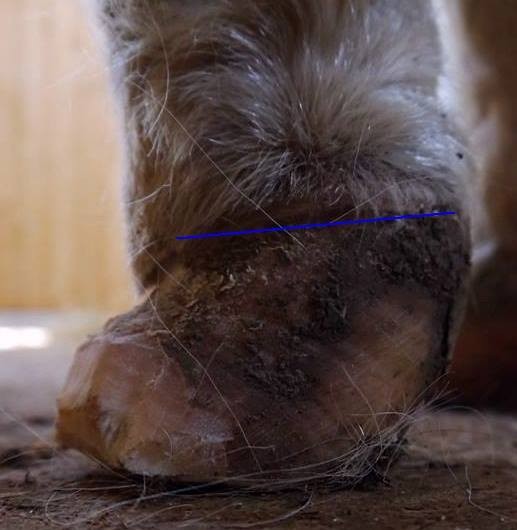 I need a clearer photo at a perpendicular angle, but guessing - the hairline angle appears to be horizontal or even higher at the heel than at the toe. 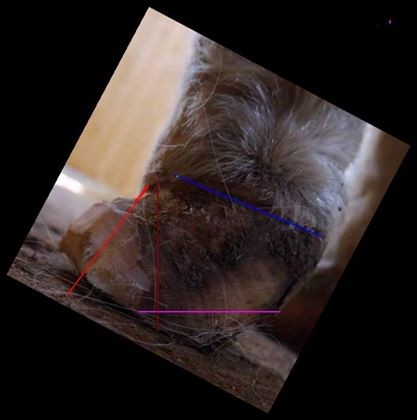 Here I rotated the foot >25 degrees until the hairline angle became ~23 degrees (blue).
To get this, the heel would need to be trimmed approximately according to the pink line. However, this could not be done in one trim, because of the risk of damaging tendons and ligaments. The heels should be slowly reduced, ideally with a small trim reducing the palmar angle by no more than 5 degrees every 2-3 days, or as Pinocchio showed he was comfortable.
I've estimated the toe in red (the true toe line may be closer to P3 than this) - the material to the outside of the red line can probably be removed safely.
There already appears to be a bevel at the toe. 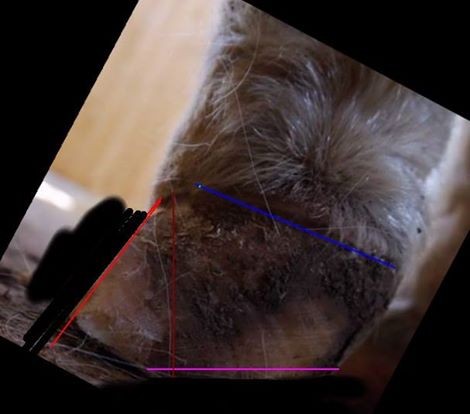 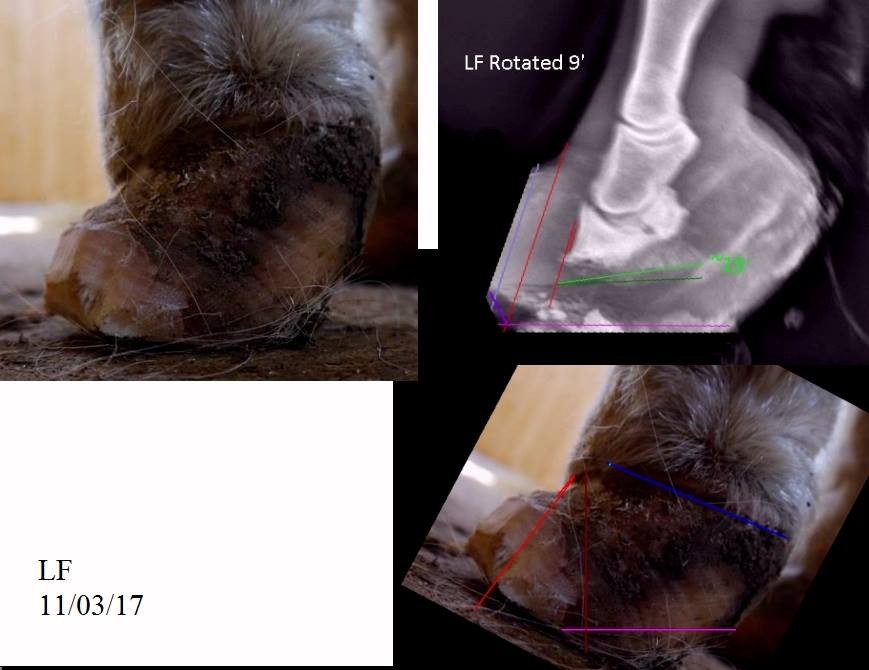 Here I've shown the left fore after the first trim, the x-ray mark up and today's photo mark up, to illustrate how much the heel appears to need to come down. 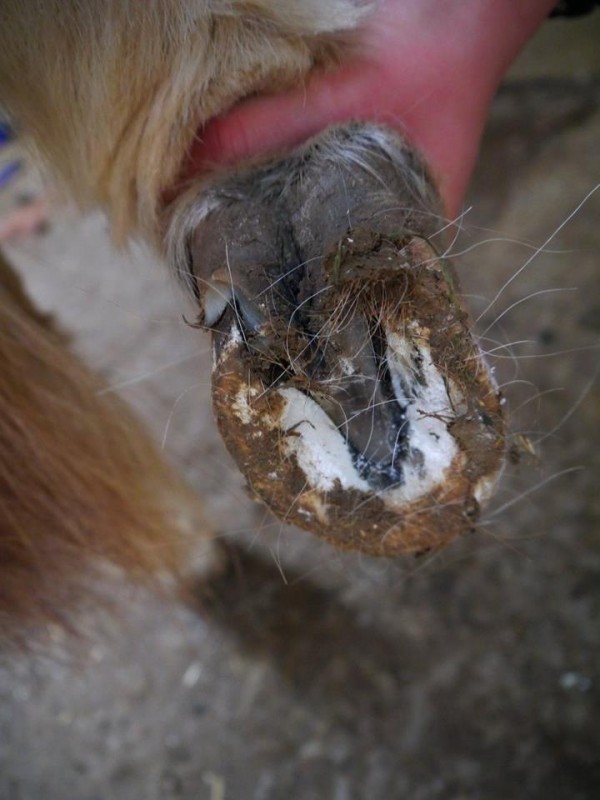 This looks pretty good, but there is probably still more excess foot material that can and should be removed.

Hopefully the CleanTrax soak will have cleaned up the frog a bit - there seems to be a split between the heel bulbs which is likely to be infected, so soak this foot and treat with the antibiotic spray - all the feet are likely to need a lot of treatment until they are the correct shape and the frogs are healthy and weightbearing.

The sole looks chalky and fairly healthy on this foot, so you may be able to find live sole and trim to that. 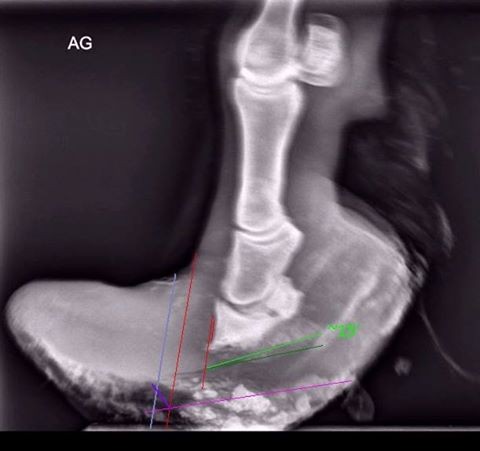 Red - toe line parallel to dorsal surface of P3, BUT because of the bone loss I would probably be cautious and bring the toe line slightly further out initially - as suggested by the mauve line.
Purple - then bevel to what might be the true toe line.
The palmar angle looked to be around 15 degrees (light green) with the foot on the ground as in the x-ray.
Dark green suggests a 5 degree palmar angle.
Pink line suggests a heel/sole trim to bring the palmar angle to around 5 degrees - there was plenty of "dead" foot to remove. 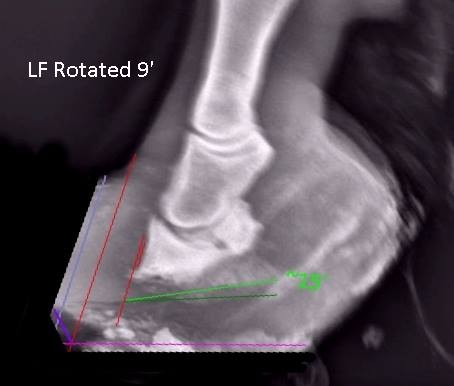 After the trim, and reducing the palmar angle by around 9 degrees, the foot should look something like this. Generally the heels shouldn't be reduced by more than 10 mm or 5 degrees in one trim, so 2 trims might be necessary.

Obviously the foot has been trimmed since the x-rays were taken.. so let's look at how the trimmed foot compares to the x-ray.... 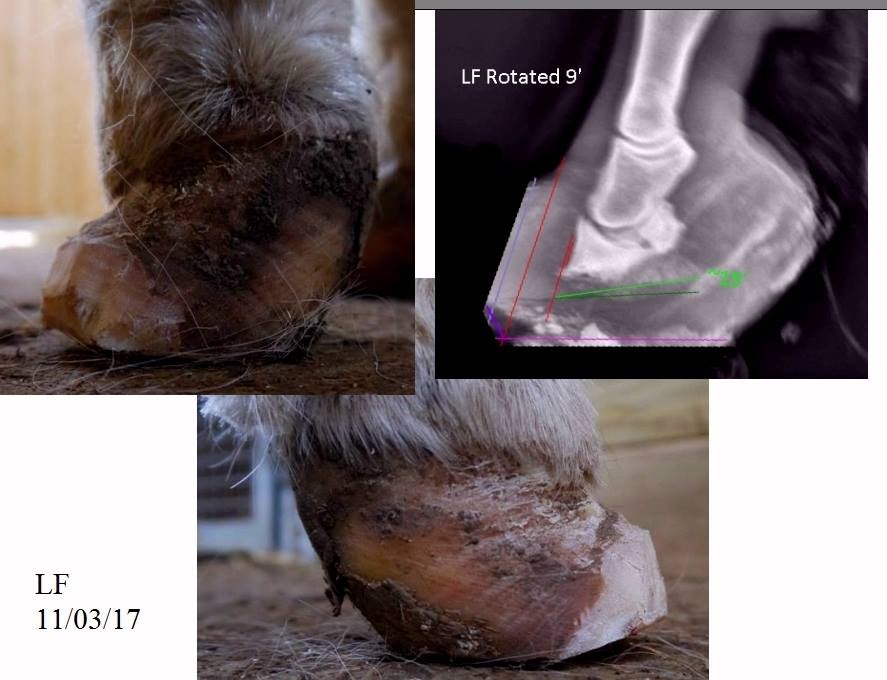 As with the right fore, I suspect that the heel is now far too high... 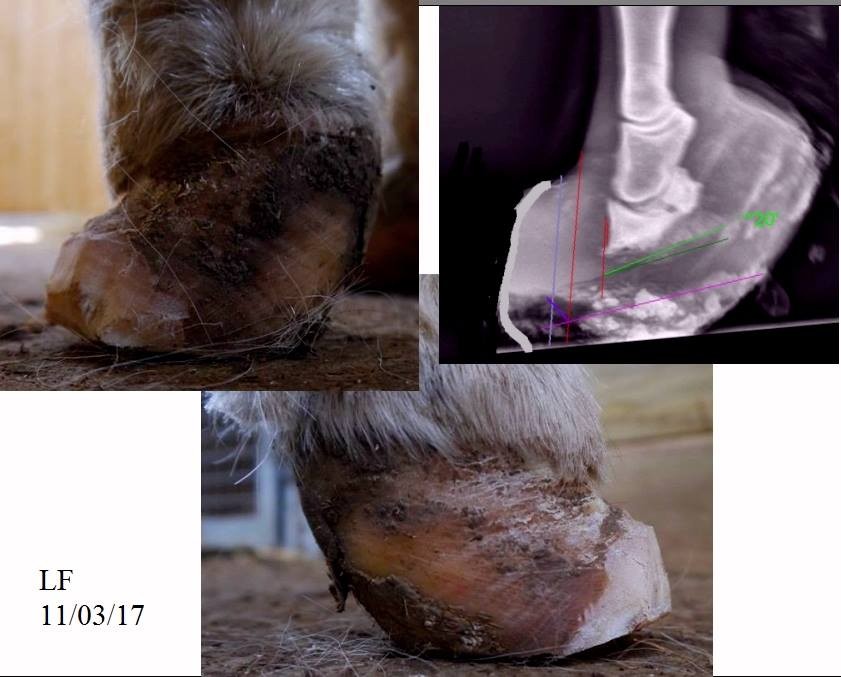 Here I've gone back to the original x-ray but increased the palmar angle by 5 degrees, giving a total palmar angle of around 20 degrees - to try to match the toe and heel outlines on the x-ray to the after trim photo. 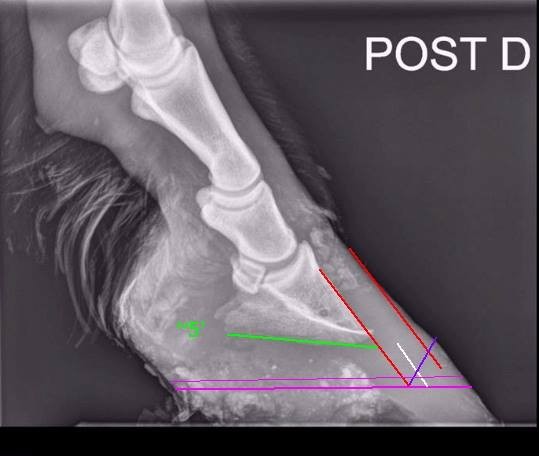 The right hind should be easy to trim.
The palmar angle on the x-ray was around 5 degrees, which is good, but there was a lot of excess foot.
The excess foot could be removed in one trim, as shown by the pink line - either the thicker pink line or the thinner pink line (which takes a bit more foot off but still leaves plenty of sole depth below P3).
Then bevel the toe as shown by the purple line. 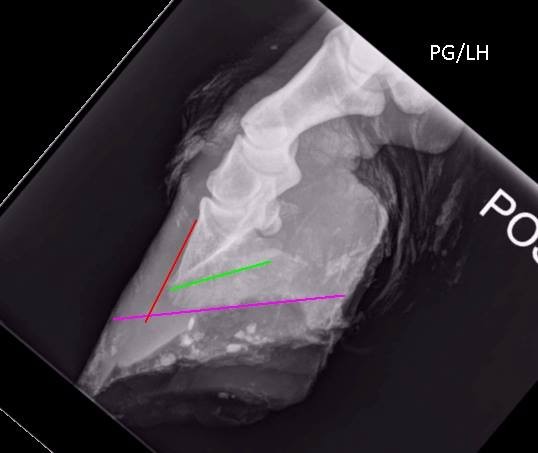 This view is useless for assessing a laminitic foot or for guiding trimming, but the left hind looks very similar to the right hind, and again there appears to be a lot of material to remove (below the pink line). 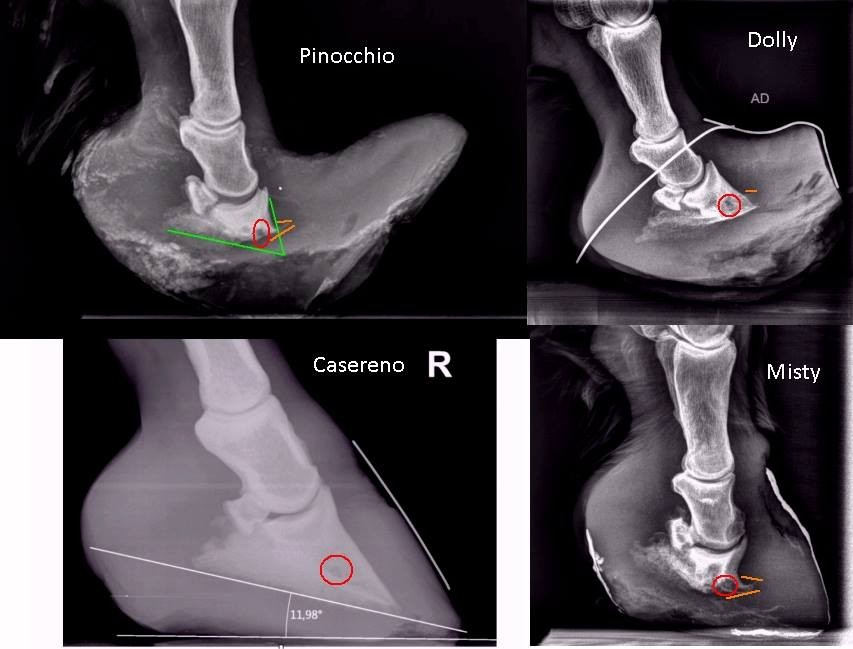 When rotation of P3, and perhaps foot deformity, is not corrected, P3 "remodels" - this can mean extra bone material, as indicated in orange - this is often called a "ski tip". And it can mean bone loss. Often both additional bone/calcification and bone loss are seen together.

Look at Casereno's x-ray. P3 makes a triangle, with a clear point at the tip. In red I have marked what I think is the foramen - these are 2 holes that can usually be seen on a front view (DP) x-ray. There is bone all around the foramen. On Pinocchio's and Misty's bones, there is very little bone around the foramen (red circle).

The front of P3 is nearly always straight - like Casereno's.
Pinocchio and Misty both have a curve in the dorsal surface of their P3 - this suggests bone loss.

Dolly has a slightly strange tip of her P3 - you can see a slight shadow of what is probably abnormal calcification, and the tip is not clear, as it is on Casereno's x-ray. But Dolly's P3 is not too bad.

I have marked approximately where I think Pinocchio's P3 should be in green.

The bone loss means that he is never likely to have strong laminar connections, so his toes may always grow away from the bone, and may need to be corrected with regular trims. Misty managed with this. I suspect it will also be important to keep plenty of hoof material around the bone - but he will probably help you with this by growing lots of hoof material.

For good news - there do not appear to be any black areas around the bone that might suggest infection.

Interestingly the rest of his bones - P2 and P1 and the navicular bone - look reasonably clean, i.e. they have clear outlines. A fuzzy outline will often suggest arthritis and calcification - you can see that Misty's P2 and navicular bone had areas with a fuzzy outline.

scam636
Posté le 13/04/2017 à 00h15
The main issue following the trim is that the heels are now very high.
This happened with Dolly too - I think I should have concentrated on her hairline angle far more to prevent this happening - although as she had a lot of heel and frog tissue that I didn't dare cut into, perhaps I couldn't have done more without frequent x-rays to guide each trim. At that time her collateral grooves did not seem particularly deep - but I later became braver at clearing out frog material and material blocking the collateral grooves, and used a very thin stick to measure the collateral grooves (a wooden kebab stick), and this allowed her feet to be trimmed to collateral groove depth (which I had checked against x-rays), giving confidence to bring her heels down. 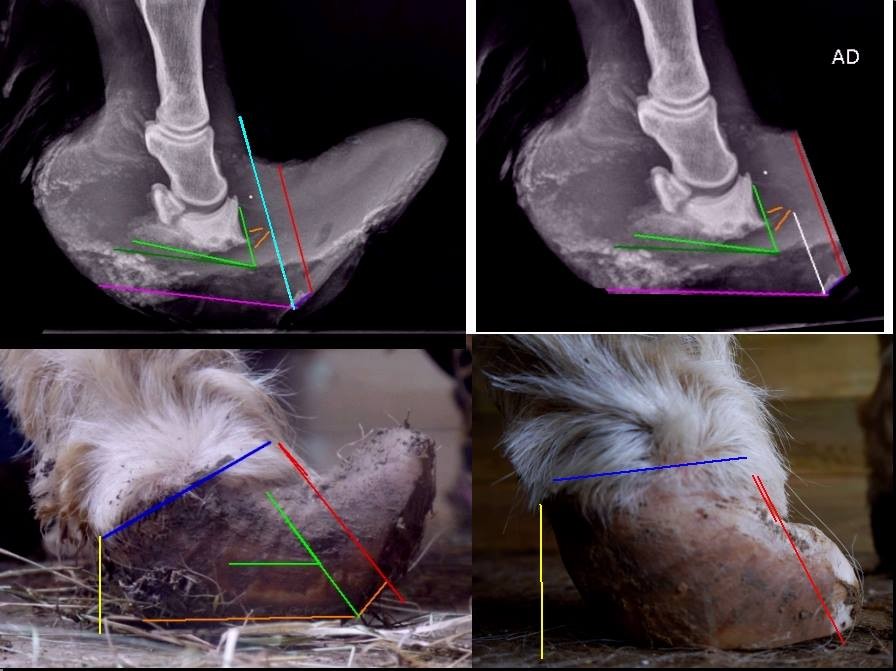 In this image:
top left is the right fore before the trim,
bottom right is the right fore after the trim,
bottom left - I've rotated the before trim photo by 25 degrees to try to get a similar hairline angle as the after trim photo, to try to illustrate what might be happening inside the foot, and
top right I've rotated the x-ray by a similar amount.

In the before trim photo (top left), the orange line is the heel - this can be hard to understand! The alignment of P3 at this point wasn't too bad. But when the unwanted material on the bottom of the foot (i.e. the underrun heel) (orange line) is trimmed, if the trim doesn't go far enough, the heel that was horizontal will become vertical and high, changing the orientation of the foot.

I haven't done enough rehabilitations of these feet to be sure yet, but I would currently suggest that on these feet, the hairline (coronary band) should always be marked when x-rays are taken, as, even though the hairline moves, this seems to be the (or one of the) most reliable point on the foot to guide the trim.

I would also make a large mark on the heel of the Aladdin's slipper foot where the orange line meets what looks like the heel (probably the heel bulbs), and keep my eye on that during the trim.

It would be very useful to see another photo of this foot now with the hair clipped away from the hairline, so that the contours of the foot can be matched exactly with the x-ray, as it is hard to be sure exactly where the hairline is or of its angle, or where the heel bulbs change into the pastern.

IF what I have modelled here is correct, then I am concerned that the palmar angle could now be very high, and the tip of P3 could be quite close to the ground. 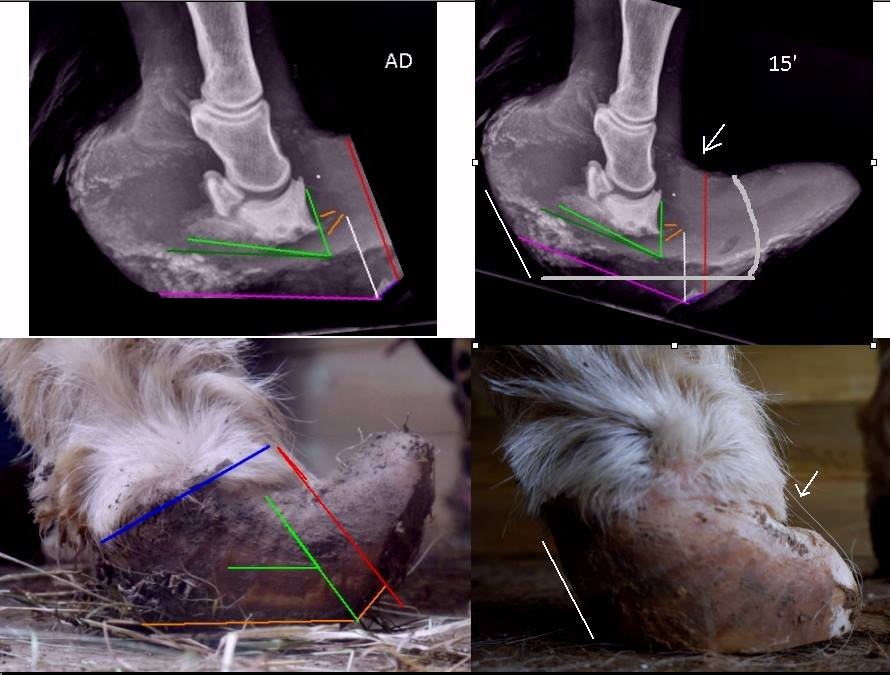 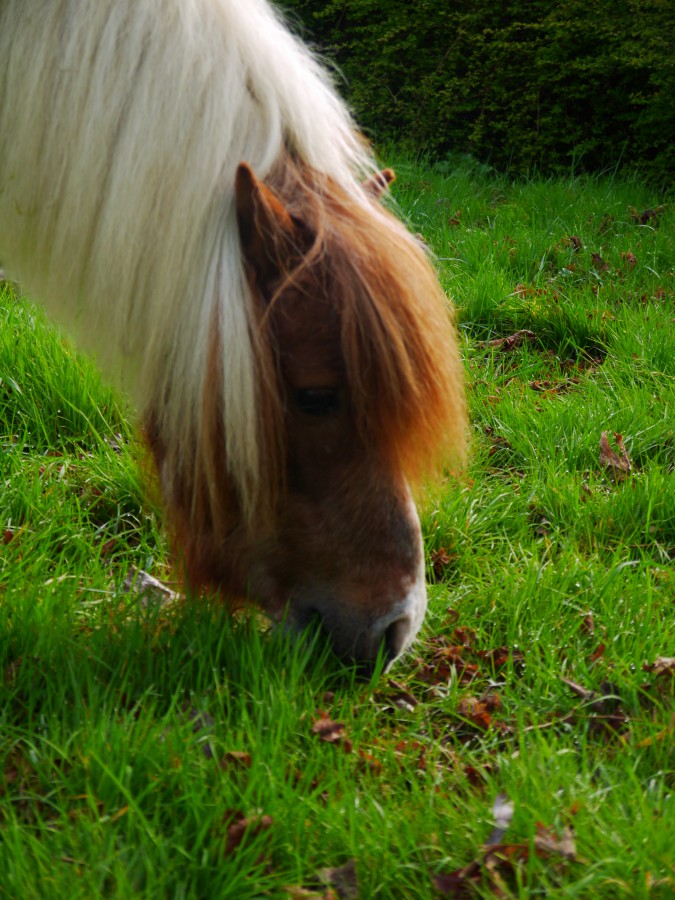 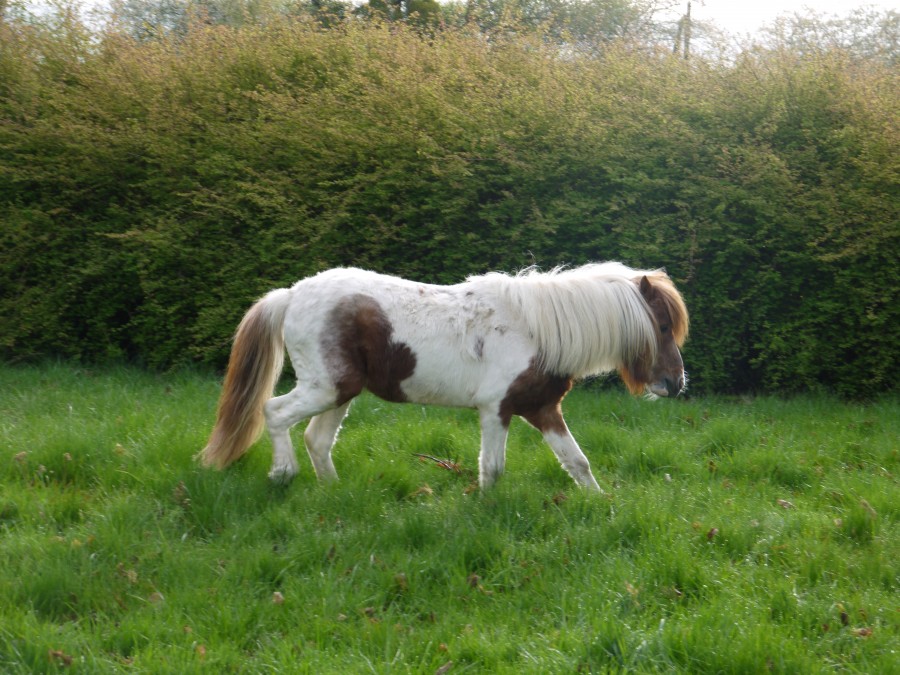 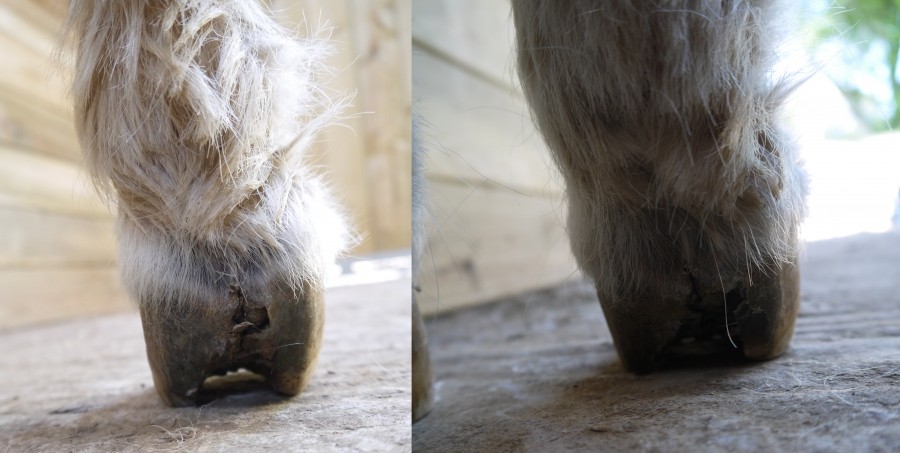 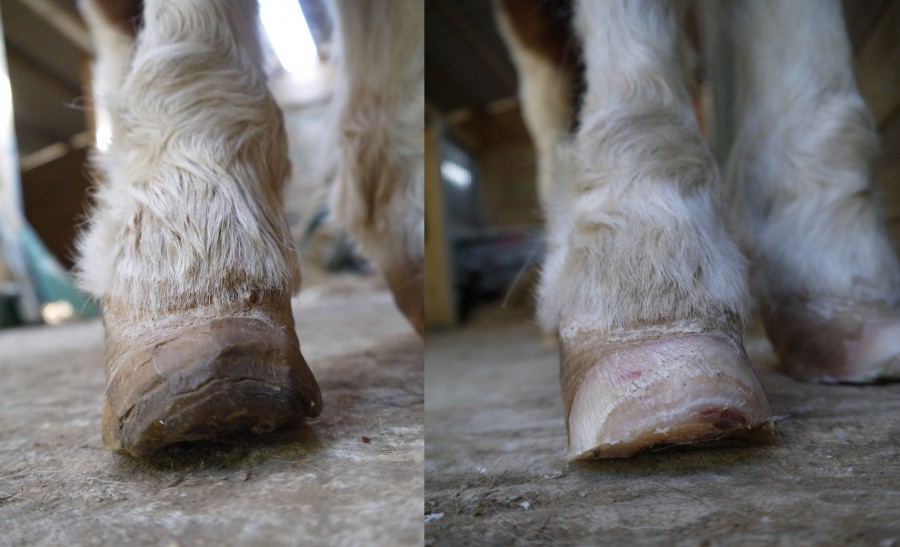 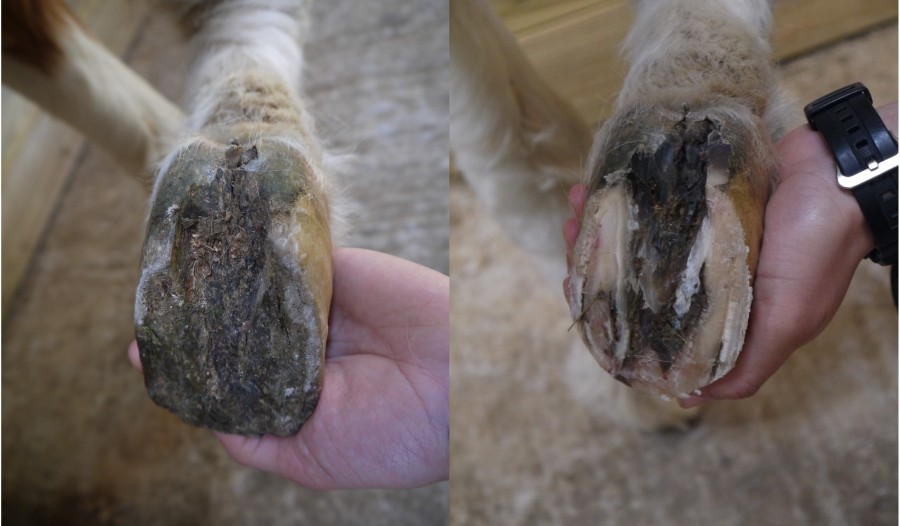